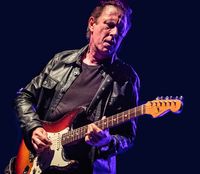 Jack de Keyzer is a British-born Canadian blues guitarist, vocalist, songwriter and producer. He has twice won the Juno Award, Canada's highest musical honour, and seven times received Maple Blues Awards, including for Blues Album of the Year in 2000 and the Lifetime Achievement Award in 2001. Tix are $30.00 and will be available soon.

$31.97 per ticket. Also will be available for purchase in Nelson, closer to the show date